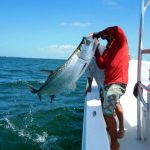 Last weekend I had the Chicago crew down again for their annual guys fishing trip.  This year the group added another “Mike” to make 3 and 2 days to their trip.  They showed up ready to fish, unfortunately Mother Nature threw a wrench in our plan blowing winds 20-30 Knots on the first two days.  So instead of trying to get on some Tarpon from the start, we spent the first two days ducking in and out of rivers and estuaries catching everything from Trout, Ladyfish and Jack Crevalle to Snook and Redfish. We fished hard all day for two days, but the idea of getting a chance to fight Tarpon weighing in at well over 100 pounds made the Snook and Redfish  seem somewhat second rate.  We made the call to fish for Tarpon the next day, even if it meant dealing with windy and ruff conditions.  The next morning we woke up, downed some coffee and pointed the bow at the bridge.  Bait was easy.  We loaded the livewell in no time and we were off in search of the mighty Silver King.  Well, Grybowski was the first to get a Tarpon away from the bridge and into open water where he could battle mano a mano.  He fought the fish like a seasoned pro and managed to get him boatside in less than 45 minutes for some quick pics and a healthy release. 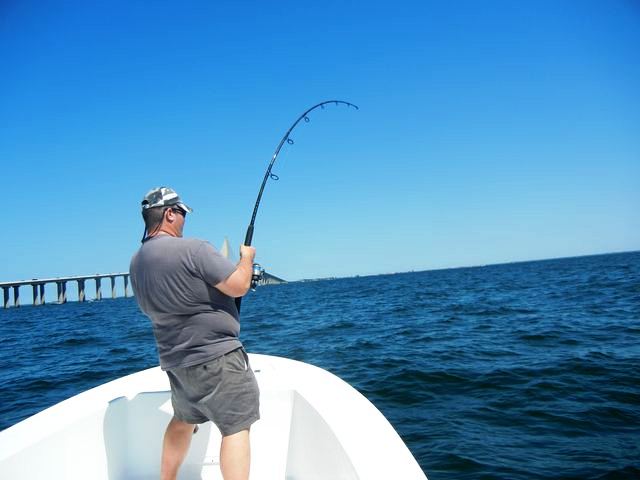 After we reset,  Grigger and Zichmiller took turns jumping Tarpon and chasing them around the bridge until Klutch couldn’t stand watching their failure any longer and decided to show them how to do it.  Klutch hooks  up on his first bait and expertly maneuvers the fish into open water, where he put the heat on and showed the hundred pounder who was in control.  After a few quick pics and a strange fish hug that I had yet to experience in my lifetime on the water,  the beautiful Tarpon bid Klutch farewell with a twinkle in her eye.

The rest of the day was a whirlwind of jumping Tarpon, smoking drags, and high fives, as we jumped a total of 9 tarpon. We were back at the dock in time to drink Rum and Coke’s and watch the sunset.

The next morning was more of the same strong winds and more Love Bugs than I care to discuss.  As we idled away from the dock, we made our plans for the day, but first things first, we needed to finalize our dinner plans!   We made a stop at one of my favorite Tampa Bay fish markets to order up a Cobia!  After a great battle on light tackle and a quick photo, we put our dinner on ice and headed towards the Skyway Bridge.  I am not sure if anyone expected the kind of day that the tarpon had in store for us, but what a day it was!! The total count for the day was 13, with most of them coming at the hands of Grigger and Zichmiller.  By 3 o’clock, everyone aboard was tired and the idea of relaxing on the dock with Cobia on the grill was too strong to ignore.  We cruised in while we reminisced about the epic day of Tarpon fishing we just experienced.  That night we ate Cobia to our hearts content and got some much deserved sleep. 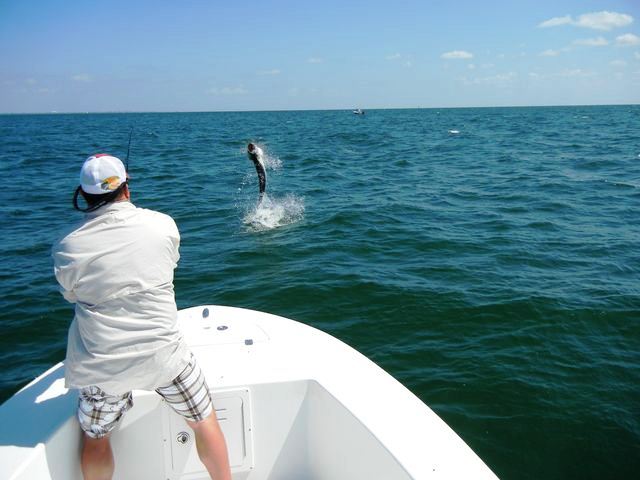 With one day left we got up a little later and a little slower than usual.  As we sipped on our coffee and Grigger pounded a few Bloody Mary’s (better than Dramamine according to him), I asked the guys what they wanted to target. To my surprise they all said, TARPON!!!!  So once again, the “Poon Slayers” were off.  Right off the bat, Grigger and Zichmiller were on fire, both landing Tarpon after hard fought battles that came close to the 1 hour mark.

As the tide slacked and began to switch we decided to run out to Egmont Key.  As we motored around, waiting for the tide to start moving, Grigger spotted a Cobia from the tower.  Grybowski was quick to rig a bait as Grigger moved the boat into position and after a perfect cast by Grybowki, the fight was on.  After about 10 minutes, the cobia made a strange head shake, possibly due to the talk of barbecue grills and marinades, and the hook pulled.  When I saw the looks of sadness overcome the faces of the Chi Town gang, I knew something must be done.  What transpired next would be believed by no one who had not witnessed it first had.  With the Cobia still on the surface I grabbing the gaff, ran to the bow and jumped in the direction of the cruising Cobia.  I stretched out my arms and inches before I touched the water I lunged with the gaff striking the Cobia in its belly.  As I sank into the water I could feel the Cobia at the end of my gaff trying its hardest to reach the bottom.  I kept tension on the gaff as I swam the fish boatside and handed the gaff to Zichmiller, who I don’t think believed there was a fish on the end until he pulled it into the boat.  I pulled myself aboard as the guys celebrated our success and soon to be Cobia dinner.

We fished Egmont for another hour and with a slow bite and only a few fish hooked, decided to head for the dock.  Eating Cobia that night was a great end to a great trip.  The guys had a great trip and I am already looking forward to next year as long as we can keep Zichmiller off the baby making train.