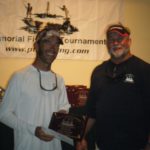 Capt. Jeff Schneider fished the 16th annual Peter T. Assimack Inshore Slam Tournament last weekend.   The Tournament is run out of the Anclote River.  It was a beautiful morning for a shotgun start of about 90 boats.   As the sun came up so did the wind gusting to around 25 knots and blowing a constant 15 throughout the day. Although Jeff didn’t get to do any fishing in the days prior to the tournament because he was fishing in Boca Grande, he was still confident he had a good game plan.

As 2 o’clock  rolled around and he had not found the right fish he decided to make a long run the opposite direction killing much of the 3 hours left in the tourney.  It only took a couple of minutes to know that the run had paid off as he hooked up on a nice Snook that would have

definitely made the leader board, but unfortunately the giant fish muscled its way around a dock and broke him off.  After recovering from the heartbreak and now running out of time Capt. Jeff decides to keep his head down and his spirits up.  Right about then Bam, Fish On!  Capt. Jeff hooks into a big Redfish and this time Jeff tightens down his drag and muscle’s his fish out from the dock and lands it.  It hits the ruler at the 30″ mark, Jeff gets his pictures, releases the fish, starts the motor, and races to the weigh in.   It was a great fish, especially considering the condition and kept Capt. Jeff on the leaderboard to take the 3rd Place Trophy.

Congratulations to Capt. Jeff on his great finish in one of the area’s most popular tournaments!

Who wants to catch a Tampa Bay Cobia? It's almost prime time! Book your sightfishing adventure at http://FishingGuideTampa.com

Reply on Twitter 1358751212351406080Retweet on Twitter 1358751212351406080Like on Twitter 13587512123514060802Twitter 1358751212351406080
Customer Reviews...
Captain Matt is the man!!! Truely a savy fisherman and a pioneer poon killa (always catch & release). He's the only man to be out on the waters of Tampa bay with. If you are lucky enough to make time to fish, he's the guy you want to guide your adventure. No question!!! See you in may Matt! Can't wait!-Bradley W Vetter
Truly the best fishing experience in all of Tampa. Top of the line tackle and rigging. If Matt cannot get you on the fish they are not there. I have fished all over the world and never had more action than a day with Matt and his awesome 1st mate. I will be back ASAP.-Bruce Ferguson
Take a fishing charter with Capt Matt and you won't regret it! He's very professional and knows the Tampa Bay Area waters better than anyone. No matter what the season or fish you want to catch he'll get it hooked. He starts his trips off with a simple question: Do you want to fish for sport or dinner? Well, that night we ate snook and redfish! A day with Capt Matt is unforgettable whether it's fishing with buddies or family. Oh yeah, and his boat is awesome!-Vinny Imbro
Capt. Matt always delivers. Regardless of the season, He knows where the fish are and can get there in his very comfortable shallow running Andros 26' boat. He provides his anglers with top notch fishing gear and a great history of his home waters, Tampa Bay. If you want to have a fantastic fishing trip in Tampa Bay, I highly recommend a charter with Capt. Matt!-Corey Maysles
Capt. Matt has not only put me on fish every time I have booked a charter - He got me my biggest tarpon ever 150+!!! He is the best Captain I have ever fished with and I recommend him highly. Always a great time and always finds the fish! -John Lashbrook
Capt. Matt is a great guide, with great equipment and an awesome boat. His attention to detail, and passion for the sport is 2nd to none. I choose Capt. Matt every time!-David Cornell
prev next
Fishing Guide Tampa
Web Design by John Lashbrook