We west coasters are so blessed to have live baits available to us throughout the year.   I have fished all over the United States,  most of the Caribbean, and some of central America and one thing I have learned is how fortunate we are to have live bait available to us year round.  I consider the west coast of Florida a true bait mecca.   With more than a dozen highly productive bait species available virtually year round, we are living in a live bait fisherman’s paradise.

Knowing the what, why, and where when catching and using live bait is key to making your day as productive as possible.   Sometimes it’s tiny scaled sardines that fit the bill, other times an 8 inch mullet or ladyfish gets top billing.  Some of our most popular baits include scaled sardines, spanish sardines, threadfin herring, blue runners, pinfish, pigfish, mojarra, menhaden, mullet, ladyfish, shrimp and ballyhoo just to name a few.  Knowing where to catch them means less time catching bait and more time catching fish! 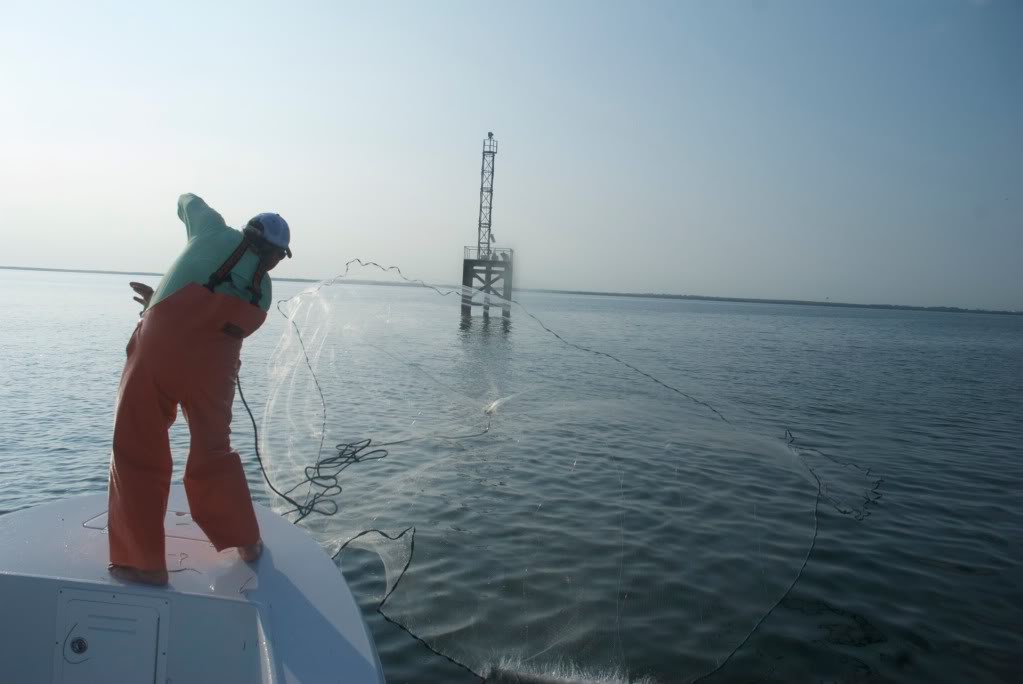 Almost every flat in our region has one or more of the aforementioned baits on it almost 12 months out of the year.  Throwing a cast net is the best way to quickly fill your livewell.   On the flats using any store bought bait attractant or chum will draw is any bait in your general vicinity.  An 8-10 ft. cast net is all you need to load up.  A standard 1-1.5 lb. per ft. net with ¼ or 3/8 inch mesh is ideal.  Many people are discouraged when whitebait(scaled sardines) are not available on the flats, but I tell them to think of it like this…….If a certain species of bait is not on flats for you to catch then it’s not on the flats for gamefish to eat.   Now that is not to say that most gamefish won’t readily eat a bait that is not prevalent in their area, but it’s also not necessary to drive all over God’s green earth to find them…..Find whatever bait is most prevalent and finding gamefish to eat them will be no problem.   Bait can also be found off the flats in deeper water.

Our region is littered with deep water bait havens.  Channel markers, range markers, shipping channel cans, and rock piles all hold some sort of bait year round.  Catching bait in open or deep water is done two ways.  Either a big heavy cast net or a sabiki rig will produce whatever bait is in the area.  The upcurrent side of the structure usually holds the most bait. If throwing a cast net is not your thing or the current is not right, a sabiki with just enough weight to reach the bottom will get the job done.   If you are after pinfish or you are marking bait with your bottom machine, but not producing, try tipping your sabiki hooks with tiny pieces of squid.

When big baits is what you’re after ladyfish, mullet, and blue runners are three top performers.  Blue runners can be sabikied on many of the deep water structure, while ladyfish and mullet are better caught in shallower water.  Mullet are most effectively caught by cast net and while there are larger nets specifically designed for mullet fishing, a large net will do the trick when you only need a dozen or two.  Ladyfish are very aggressive feeders and will eat almost any small bait including sardines, threadfin herring, shrimp as well as small artificials and flies.   Keeping larger baits alive can be a challenge.    The key to keeping large baits lively is plenty of room for them to swim and lots of fresh water.   I have found that a minimum of a 40 gallon livewell, and 1600 gallons per hour turnover is minimum when trying to keep big baits alive.