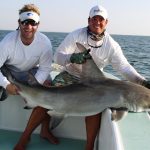 The Fall weather is here and with it brings some of the best fishing of the year.  Almost every part of the bay is holding good numbers of gamefish and the near shore and offshore fishing is red hot as well.  Inshore fishing for Snook, Redfish, and Trout has been excellent and a Florida Inshore Grand Slam which consists of one of each of the above mentioned species is almost a guarantee, even on a half day of fishing.

The Snook have started to move into the rivers, estuaries, and small bays, and are feeding almost 24/7 to fatten up for Winter.

The Redfish have finally started to school up on the flats in really big numbers and most of the ones we are catching have been in the 25-35 inch range.  There are also some breeder Redfish moving through our region and they offer a once in a lifetime opportunity to tangle with one in the 30-50lb range.  You can even try it on light tackle if you think you are up for the challenge.

The Trout bite has been excellent, especially on the south shore and middle bay.   The Little Manatee River produced several trout over 25 inches last week.  The best action has been a little deeper in the 3-5 ft. range which can sometimes make them a little harder to locate, but when you do, you will probably hit the mother load and will reach your limit in no time.

There are also a few Cobia still hanging around too.  They are not here in the numbers they were a few months ago, but are definitely still worth dedicating a little time to.   Focus your efforts on sight fishing for them on the slack part of the tide and in the middle of the day when the sun is overhead.

Offshore fishing is all about the near shore Grouper and Kingfish right now.  As water temps drop, the Grouper move shallower making the trips to the fish shorter. Over the last month, we have hit our limit of Gag Grouper on every trip and in less than 80 ft. of water.  Farther offshore there are still plenty of nice Grouper and even some Dolphin still around.

The Mangrove Snapper are showing up in great numbers and they seem bigger than years past.  The trick is lots of chumming and light tackle. 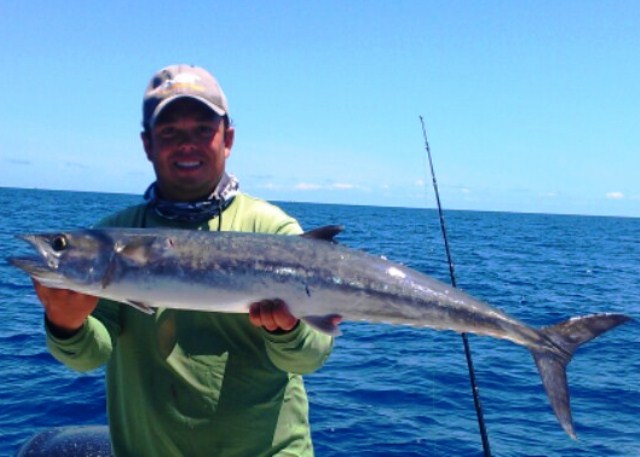 Kingfish Season is Here!!!
The Kingfish have started their Fall migration and the big boys are already here.  Smoker Kings are a blast to catch, and no matter what anyone tells you, they are great to eat too.  I challenge anyone to come try some of my Kingfish dip or grilled Kingfish dinner and see if you don’t think it’s great.  In fact, I think I am going make some dip this week, just have to go out and catch a King first.  Old Salt Fishing Foundation’s “King of the Beach” tournament is just over a week away and should be a great event.   I expect to see some great fish weighed in.  Hopefully, the biggest will come from me and the rest of the “Hooked Nation” Team after posting a great fish last year.

With the great weather and even better fishing we are having, now is a great time to get out on the water and catch a bunch of fish!

Here are a few more pics of the last few weeks, just to get you ready to go!

Who wants to catch a Tampa Bay Cobia? It's almost prime time! Book your sightfishing adventure at http://FishingGuideTampa.com

Reply on Twitter 1358751212351406080Retweet on Twitter 1358751212351406080Like on Twitter 13587512123514060802Twitter 1358751212351406080
Customer Reviews...
Captain Matt is the man!!! Truely a savy fisherman and a pioneer poon killa (always catch & release). He's the only man to be out on the waters of Tampa bay with. If you are lucky enough to make time to fish, he's the guy you want to guide your adventure. No question!!! See you in may Matt! Can't wait!-Bradley W Vetter
Truly the best fishing experience in all of Tampa. Top of the line tackle and rigging. If Matt cannot get you on the fish they are not there. I have fished all over the world and never had more action than a day with Matt and his awesome 1st mate. I will be back ASAP.-Bruce Ferguson
Take a fishing charter with Capt Matt and you won't regret it! He's very professional and knows the Tampa Bay Area waters better than anyone. No matter what the season or fish you want to catch he'll get it hooked. He starts his trips off with a simple question: Do you want to fish for sport or dinner? Well, that night we ate snook and redfish! A day with Capt Matt is unforgettable whether it's fishing with buddies or family. Oh yeah, and his boat is awesome!-Vinny Imbro
Capt. Matt always delivers. Regardless of the season, He knows where the fish are and can get there in his very comfortable shallow running Andros 26' boat. He provides his anglers with top notch fishing gear and a great history of his home waters, Tampa Bay. If you want to have a fantastic fishing trip in Tampa Bay, I highly recommend a charter with Capt. Matt!-Corey Maysles
Capt. Matt has not only put me on fish every time I have booked a charter - He got me my biggest tarpon ever 150+!!! He is the best Captain I have ever fished with and I recommend him highly. Always a great time and always finds the fish! -John Lashbrook
Capt. Matt is a great guide, with great equipment and an awesome boat. His attention to detail, and passion for the sport is 2nd to none. I choose Capt. Matt every time!-David Cornell
prev next
Fishing Guide Tampa
Web Design by John Lashbrook